Maintaining an EGR cooler is not a hard task if you know when it needs your attention. There are certain symptoms that can be observed which will help you repair the EGR cooler or get it replaced.

Let us now have a look at the symptoms that might suggest that it is a bad EGR cooler and that it might need a replacement. One can choose EGR coolers from Navistar or Cummins like Navistar maxxforce 9 EGR cooler as they are affordable and of the best quality.

The Symptom 1: There can be a loss of coolant from the degas bottle or from the cooling system. The reason for the same can be unexplained and this can only occur when you have a faulty EGR cooler. Experts always suggest users go with reputed ones like Cummins ISX EGR cooler. When there is a leakage in the EGR cooler, the coolant can get leaked into the exhaust system but does not come outside of the engine. A number of people often ignore this kind of a warning sign and this can turn out to be quite expensive for them. The longer one ignores this, the more of the coolant gets leaked out from the engine and it can worsen the situation.

The Symptom 2:  If you find that white smoke is coming out of a tailpipe, then it can be steam. If you ignore the symptom 1, the coolant that gets leaked might get into the exhaust system and this can vaporize easily and then it would turn the liquid to the steam and the same is seen coming out from the exhaust. To avoid such problems, one can choose coolers like Navistar maxxforce DT EGR cooler. 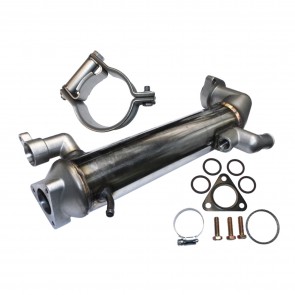 The Symptom 3: While the leaking of the coolant need not say that the cooler you have is a bad one. It can also be a sign of the engine oil cooler getting plugged and this can restrict the coolant’s flow from reaching the EGR cooler. As the cooler does not get the needed coolant, it can start to boil and the same can create a high-pressure pockets of steam which will come out from the degas bottle. This will also force the coolant from the lid. If such an instance occurs, then you certainly need to replace the EGR cooler. There is a need for this as the cooler is also overheated and is overly stressed and there are chances that it might fail in future. If there is a need to replace, you can choose the Navistar maxxforce 10 EGR cooler or the other suitable models. These are known to be reliable and are of superior quality.

How Can One Diagnose If Your EGR Cooler Is A Bad One?

Well, there is a much easier method to do this. All you need to do is a simple test keeping the above-mentioned symptoms in mind. You need to turn the rig off when you are planning to test the cooler. If your EGR coolers looks steam cleaned or wet, then there can be a problem with it.